Why You Should Choose Python Development for 2023 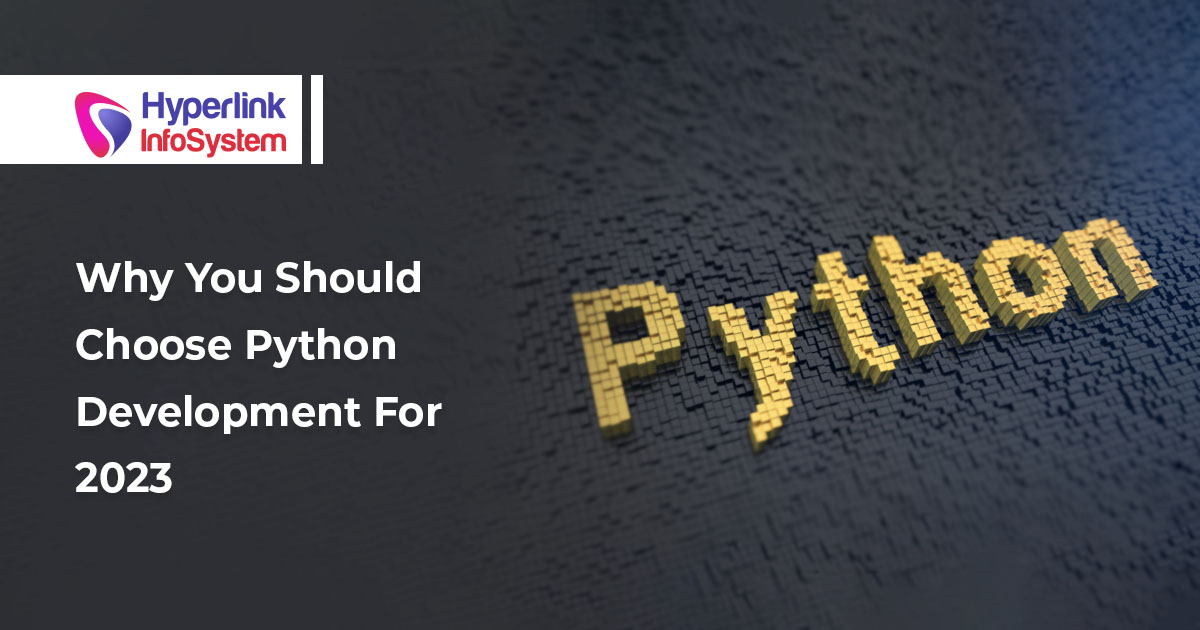 Python has been around for nearly three decades now, and in that time, it has established itself as one of the most popular and versatile programming languages in existence. In recent years, Python has seen a surge in popularity, particularly among developers who appreciate its clean and concise syntax and its extensive range of libraries and frameworks.

There are many reasons why Python is such an attractive option for development, but here are just a few of the most significant:

Why You Should Choose Python Development for 2023

1) Python is easy to learn

One of the main reasons why Python is so popular is because it is relatively easy to learn compared to other programming languages. Python adopts a simple and concise syntax which makes it perfect for beginners. In addition, Python comes with a huge range of libraries and frameworks that can be used to speed up the development process.

Another great thing about Python is its versatility. Python can be used for a wide variety of tasks, from web development and data science to machine learning and artificial intelligence. No matter what your development goals are, chances are Python has the tools you need to get the job done.

3) Python is supported by a huge community

Because Python is so popular, it benefits from a large and active community of developers who are always creating new libraries and frameworks. This means that there is always someone available to help you if you run into any problems while developing your project.

Python is an open-source language, which means that it is constantly being improved by its community of developers. New features and improvements are released on a regular basis, keeping Python up-to-date with the latest developments in the world of programming.

If you're looking for a versatile and easy-to-learn programming language, Python is an excellent choice for your next development project. Python's popularity is only going to continue to grow in the years to come, so now is the perfect time to get started with this powerful language.

Why Python Is the Best Programing Language in 2022?

Python is widely considered to be the best programming language in the world. It's versatile and easy to learn, making it a great choice for beginners and experts alike. And it has a thriving ecosystem that features a wealth of libraries and frameworks that can help you develop your applications quickly and efficiently.

In this article, we'll explore some of the reasons why Python is so popular, and why it's likely to continue being the best programming language in the years to come.

One of the main reasons Python is so popular is that it's versatile. It can be used for developing a wide range of applications, from simple scripts to complex machine learning models.

2) Python Is Easy to Learn

Another reason Python is so popular is that it's relatively easy to learn. It has a concise and readable syntax that makes it perfect for beginners. And there are plenty of resources available to help you get started, including books, online courses, and tutorials.

3) Python Has a Thriving Ecosystem

Python also has a thriving ecosystem that features a wealth of libraries and frameworks. This can be extremely helpful when you're developing your applications, as you can use these tools to quickly add functionality without having to write everything from scratch.

4) Python Is Used by Some of the World's Biggest Companies

Python is used by some of the world’s biggest companies, including Facebook, Google, Netflix, and Instagram. This is a testament to its versatility and power, as these companies wouldn't use it if it wasn't up to the task.

Python is continuously evolving and improving. New features are regularly added to keep it up-to-date with the latest trends in programming. And the community is always working on new libraries and frameworks to make development easier.

There's no doubt that Python is an incredibly popular programming language. And it's only going to become more popular in the years to come. So if you're looking for a versatile, easy-to-learn language that will help you develop amazing applications, Python is the perfect choice.

Python is a powerful programming language that is widely used in many industries today. Python is easy to learn for beginners and has many modules and libraries that allow for robust website development. Python is also an open-source language, which means that it is free to use and distribute.

There are many reasons to choose Python for website development. Python is a versatile language that can be used for developing both simple and complex websites.

Python’s syntax is relatively simple and easy to read, making it a great choice for beginners. Additionally, Python offers a number of built-in data types and structures, which can save developers time when coding.

Another advantage of using Python for website development is its scalability. Python websites can be easily scaled up or down to accommodate changing needs. Python is also efficient, which means that it can handle large amounts of data without slowing down.

Finally, Python is an interpreted language, which means that it doesn’t need to be compiled before it can be run. This makes it easy to deploy Python websites on a variety of platforms.

Python is a great choice for website development because it is versatile, scalable, and efficient. If you are looking for a language that is easy to learn and use, then Python is a good option for you. Additionally, Python’s interpreted nature makes it easy to deploy on a variety of platforms.

As we've seen, Python is a versatile language that can be used for a variety of purposes. It's easy to learn, and it has a wide range of libraries and frameworks that make development faster and easier. In addition, Python is constantly evolving and improving, so it's likely that it will continue to be a popular choice for developers in the future. If you're thinking about starting a career in software development, or if you're just looking for a new language to learn, Python is definitely worth considering.